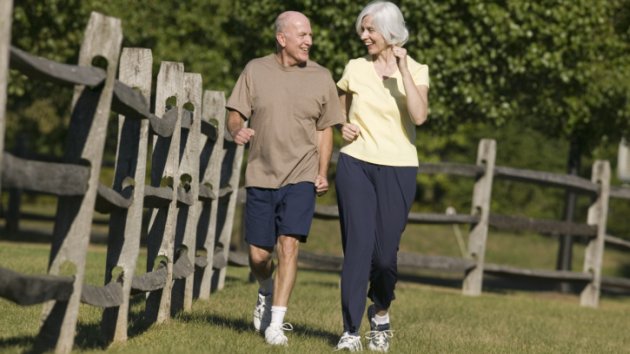 April 10, 2014 – It’s a good day for senior citizens worried about dementia and diminishing mental abilities. Two studies out today offer real hope. One says that regular exercise can help senior women boost the size of the brain area used for memory and learning. The other found that exercise after middle age seems to slow dementia in old age and is most effective for those who are overweight. The key point being it may never be too late to boost your mental ability by exercising.

The study of older women involved women between the age of 70 and 80 that were living independently at home.

Regular aerobic exercise appeared to boost the size of the area of the brain (hippocampus) involved in verbal memory and learning among these women whose intellectual capacity had been affected by age.

The hippocampus has become a focus of interest in dementia research because it is the area of the brain involved in verbal memory and learning, but it is very sensitive to the effects of aging and neurological damage, according to the report on the study published online in the British Journal of Sports Medicine.

The researchers tested the impact of different types of exercise on the hippocampal volume of 86 women who said they had mild memory problems, known as mild cognitive impairment — and a common risk factor for dementia.

Roughly equal numbers of them were assigned to either twice weekly hour long sessions of aerobic training (brisk walking); or resistance training, such as lunges, squats, and weights; or balance and muscle toning exercises, for a period of six months.

The size of their hippocampus was assessed at the start and the end of the six month period by means of an MRI scan, and their verbal memory and learning capacity was assessed before and afterward using a validated test (RAVLT).

Only 29 of the women had before and after MRI scans, but the results showed that the total volume of the hippocampus in the group who had completed the full six months of aerobic training was significantly larger than that of those who had lasted the course doing balance and muscle toning exercises.

No such difference in hippocampal volume was seen in those doing resistance training compared with the balance and muscle toning group.

There was one result from the study that raised a red flag. Despite an earlier finding in the same sample of women that aerobic exercise improved verbal memory, there was some evidence to suggest that an increase in hippocampal volume was associated with poorer verbal memory.

This suggests that the relationship between brain volume and cognitive performance is complex, and requires further research, say the authors.

But at the very least, aerobic exercise seems to be able to slow the shrinkage of the hippocampus and maintain the volume in a group of women who are at risk of developing dementia, they say.

And they recommend regular aerobic exercise to stave off mild cognitive decline, which is especially important, given the mounting evidence showing that regular exercise is good for cognitive function and overall brain health, and the rising toll of dementia.

Worldwide, one new case of dementia is diagnosed every four seconds, with the number of those afflicted set to rise to more than 115 million by 2050, they point out.

The research was made available by the BMJ-British Medical Journal.

The of the second study suggest that the window of opportunity for physical activity interventions to prevent dementia may extend from midlife to older ages, according to researchers from the University of Eastern Finland..

Physical activity in midlife seems to protect from dementia in old age, they report. Those who engaged in physical activity at least twice a week had a lower risk of dementia than those who were less active. The protective effects were particularly strong among overweight individuals.

In addition, the results showed that becoming more physically active after midlife may also contribute to lowering dementia risk.

Several modifiable risk factors for dementia have been suggested, but further refinement of this information is essential for effective preventive interventions targeted at high-risk groups.

Leisure-time physical activity (LTPA) is a particularly important due to its broader effects on health in general and cardiovascular health in particular. Previous research has yielded inconsistent evidence on the association between LTPA and dementia, possibly because of short follow-up time, intensity of physical activity or population characteristics such as sex, body mass index, age or genetic risk factors of dementia.

Recent findings from the Cardiovascular Risk Factors, Aging and Incidence of Dementia (CAIDE) Study demonstrated that those who engaged in leisure-time physical activity (LTPA) at least twice per week had lower risk of dementia in comparison to less active individuals. Although these protective effects were observed in the entire study population, regardless of their sex or genetic risk factors, they were particularly strong among overweight and obese individuals.

Results from currently ongoing trials, such as the Finnish multi-center trial FINGER may give more detailed information about the type, intensity, and duration of physical activity interventions that can be used for preventing late-life cognitive decline.

The study was conducted at the University of Eastern Finland, Department of Neurology and published in Alzheimer's & Dementia.